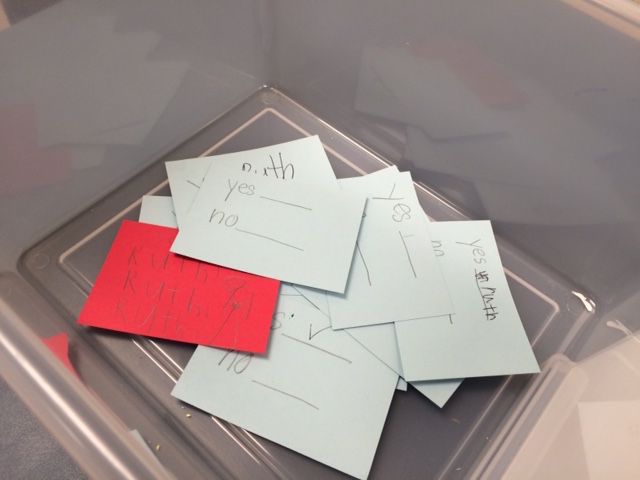 The conversation in WorshipArts took an unexpected turn on Sunday when Rosi explained that the congregation was staying in the sanctuary after the service in order to vote.  Curiosity moved toward concern when the children learned that the adults were voting on Ruth’s contract renewal.  Clearly the idea that a pastoral role could be up for debate had never occurred to them.  “Don’t we need two people (for a vote)?”  We explained that this vote was not a choice between two candidates, but rather a choice between yes-keep Ruth as our pastor for the next 3 years, or no-don’t keep Ruth as our pastor for the next 3 years.  “We should keep her forever,” came the swift and seemingly representative response!

An older child offered to make the ballots and we discussed how to mark their choice.  “Should we put our name on it?” one asked.  “Is this ana..ano..animos?” another chimed in.  Yes, voting is usually anonymous, we concurred.

They worked diligently and then we began to collect the ballots.   But the next question once again started a flurry of discussion…”Do these count?” a child asked.  Well, technically you have to be a member for your vote to count we told them.  “I want to be a member,” we immediately heard.   “I AM a member – I know because my whole family are members,” came a sure voice.   We wondered together about how old you have to be to be a member; do you have to be baptized to be a member?  Suddenly there were new questions; perhaps new frustrations.

During Children’s Time in the morning’s worship service, the young listeners had heard how all of their feelings mattered – even the difficult emotions.  They were told that adults in this church are ready to hear about the good AND the hard in their lives.  And together we listened to an adult congregant tell her own story of struggle.

As we concluded WorshipArts and tallied the ballots, I worried that the group left perhaps feeling disappointed in the realization that the ownership they felt in the church had been somehow diminished a bit through the membership discussion.

But I also hope they left knowing that in this church their voices count, even when their votes do not.

As for the WorshipArts ballot results … anonymous and unanimous.

It’s Ruth for the win!